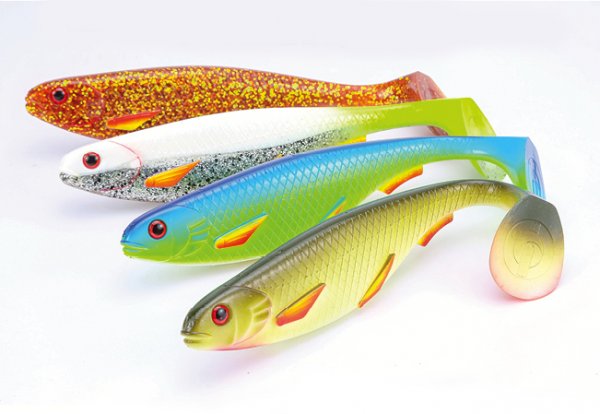 With the Predator P-18 model, the manufacturer STROFT, already known for their top fishing lines, is launching its first rubber fish lure on the market! As the name suggests, the Predator P-18 is an 18-centimeter rubber lure for predator fishing that was originally developed for pike fishing. The STROFT Predator 18 has an optimal running behavior and moves very naturally in the water, almost like a living prey fish. The streamlined body of this bait has so-called tear-off edges in the front and in the middle, which already create swirls and currents when the line is slowly pulled in and thus provide an additional lure effect. The first two tear-off edges are created on both sides by the protruding gill covers. The second row is formed by the protruding pectoral fins. The last two tear-off edges are formed using the two outstanding pelvic fins. A diamond-shaped scale relief was also stamped into the body. This creates even more turbulence and currents. A swaying tail fin optimizes the lure effect and the slightly larger paddle also ensures a perfect flank of the rubber fish up to 180 °. Gills are lifelike colored red. Chest and pelvic fins were given a gradient. The plastic eyes make this rubber bait look even more natural. No predatory fish should be able to swim past this great rubber bait. The new STROFT Predator P-18 is currently available in size 18 cm and in four great, eye-catching colors:

Weight of the bait is 46 Grams.

Color combinations. The experience of many fishing experts confirm that the bait color should be changed more often for better fishing success. The following rules have arisen: In low light conditions and cloudy water, you should use a striking or bright color. In sunny weather and clear water, more subtle and darker colors are used. However, this rule does not always work, but sometimes it’s the other way round. Because there are also experiences that confirm that fish lose interest in bait the more often a bait of the same color is used in this water. For this reason, the more successful anglers are those who vary the colors of their rubber fish more often. Obviously there is a habituation effect with predatory fish. The developers of the Predator P-18 have had exactly this experience: Sometimes it is enough if only parts of the bait, e.g. Gills or fins, are highlighted in colors to encourage the predatory fish to bite again. This experience was also taken into account when developing the Predator P-18. For example, the protruding inside of the gills was colored red. The pectoral and pelvic fins were provided with a color gradient. This increased the visual impact of the bait and it also moves even the laziest pike to attack. This way, the Predator P-18 soft bait is permanently catchable.

Features at a glance: